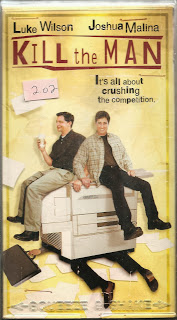 Blurb From the VHS Jacket: “Stanley Simon and his best friend are the struggling owners of Long Shot Copies. Their hopes of success are quickly disappearing after a copy superstore opens across the street.”

What Did I Learn?: Apparently, communist revolutionaries are more than willing to bend their principles and side with capitalists if they receive a discount on bulk photocopies.

You Might Like This Movie If: you enjoy watching crazy people enter the local King Co's... I mean, Kinkos.
Really?: Kill the Man is a screwball comedy, so maybe it’s a bit unfair to judge it in terms of its overall credibility, yet: 1) I had a great deal of trouble believing Stanley and Bob would ever hang out together, let alone be best friends, or go into business; 2) If those mysterious men-in-suits were really going to buy out Stanley and Bob's shop for an enormous sum of money, wouldn’t they have simply stated their business up-front, instead of making numerous (and pointless) visits?

Rating: Kill the Man has some genuinely funny moments (which is why I’m barely recommending it), but it’s not a great film. The movie works best when Stanley and Bob develop silly schemes to take down “King Co”, but much of Kill the Man is dedicated to Stanley’s not-terribly-funny-or-interesting relationship with Vicki, and you sometimes get the sense that some of the performers (especially Phil LaMarr and Philip Rhys) are trying far too hard to be zany. 5.5/10 stars.