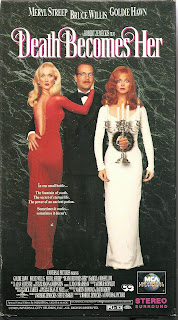 Halloween Movie #1 (By the way: I'm not starting a Goldie Hawn film fest - she just happened to star in this movie, and in Town and Country.)

What Did I Learn?:  Hmm...if I ever want to murder somebody, I’ll slip them some narconal (an alcohol-based tranquilizer) during drinks, plop them into their car, pour some whisky down their throat, and push it over a cliff. What a great idea!

You Might Like This Movie If: you'll do anything to stay young and beautiful - even inject/ingest poison.


Really?: So wait...Lisle gives Madelaine and Helen the gift of eternal life (or...”undead” status), and then refuses to help either of them after Ernest escapes? Um...what’s to stop either of them from going straight to the press and exposing the entire story? The two of them have a HUGE bargaining chip. 2) Wow...it certainly is lucky that the one person Madelaine and Helen have in common is an undertaker who used to work as a plastic surgeon, isn’t it?

Rating: Death Becomes Her is a very black, and occasionally quite funny comedy from the early 1990s. Streep and Hawn are wickedly fun as a couple of over-the-hill-and-desperate celebrities, and Willis plays against type as a nebbishy, and quite un-John Maclainish plastic surgeon. My big complaint would be that after a magnificent first half, the movie starts to fall apart (much like Goldie and Meryl!) into a lot of tit-for-tat violence, and Bruce Willis getting chased around a mansion. 7/10 stars.