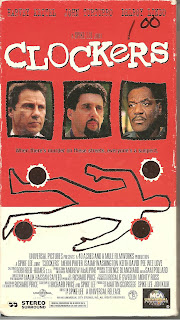 Synopsis: Crooklyn clocker confounds cops, consigns crack cocaine, kills competing cutthroat capitalist. [Ok, I’m actually not entirely sure if Strike was selling crack or heroin, but I was in the mood for some alliteration.]

Blurb From the VHS Jacket: “A ‘clocker’ is a 24-hour drug dealer and Strike (Mekhi Phifer) is the hardest-working one on the streets. But for Strike, time is running out. When the local drug kingpin (Delroy Lindo) tips Strike off about an opportunity for advancement, a rival dealer ends up dead, and Strike suddenly finds himself caught between two homicide detectives.”

What Did I Learn?:  Apparently, if the cops like you, and think you’re a productive member of society, they’ll help you concoct some bullshit self-defence arguments if you commit a murder.

Really?: 1) See “What Did I Learn?”, 2) You know...if somebody spat into a $100 bill and then stuffed it into my suit jacket, I don’t think I would throw it away immediately afterward.

Rating: I’m not a big Spike Lee fan, but Clockers is a damned good movie. It works both as a police procedural, and as a character-driven look at the low-level New York drug trade. Harvey Keitel and Lindo put in good performances as a homicide investigator, and barber/criminal mastermind, respectively, but Phifer is fantastic as Strike, the clocker with a (literally!) weak stomach. Oh – watch for Michael Imperioli (best remembered as Christopher from The Sopranos) as a vice cop Keitel’s character uses to make life difficult for Strike. Highly recommended. 8.5/10 stars.