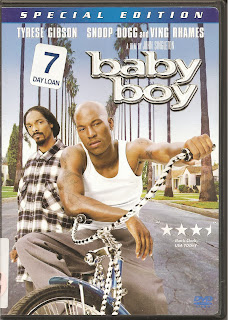 Urban Crime Movie #11 (Hmm...this is actually more of a ‘hood movie, considering there really isn’t any crime until the last 20 minutes or so)

Synopsis: Man-child acts like a selfish, violent, misogynistic turd because of racism...or poverty...or gangsta rap lyrics... or sugary breakfast cereals, or whatever.

What Did I Learn?: 1) Fellas, if you’re determined to sleep with other women, and your girlfriend is angry-but-ok about it, don’t fuck anyone in her office. It’s a baaaaaaad idea. 2) Removing the fingerprints from a murder weapon is apparently a great male bonding experience.

You Might Like This Movie If: based on the title, you figure it must be a live-action version of a famous cartoon.


Really?: 1) See “Synopsis”... Baby Boy opens with a claim by Dr. Frances Chris Walson that many African-American men are emotionally stunted because of a racist society, and yet Jody never once encounters any racism in this movie. 2) Jody sure doesn’t have a terribly sympathetic mom, does he? I mean wow...she doesn’t even bother to mumble an apology after discovering she was wrong to accuse Jody of planting marijuana in her garden. 3) Um... did I miss something? Couldn’t Yvette simply call the cops and have them remove Rodney from her apartment? I’m pretty sure any obligation she felt she owed him was negated the minute he beat her up and attempted to rape her.

Rating: Baby Boy is a well-written, and often-funny character-driven drama featuring a number of good performances (Ving Rhames has a nice supporting role), especially from Gibson, who proves he has acting talent. While I like Baby Boy, and it has an important message - for everyone - about growing up and taking responsibility, the movie tends to drag in places, and let’s face it – Jody (Gibson) is a real asshole until the final five or ten minutes. 8/10 stars.