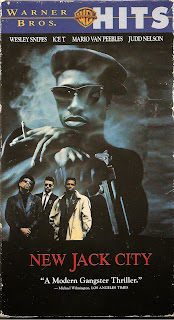 Synopsis: It’s like The Wire...except without the complex, multi-layered storylines, intense character-development, and deep understanding of police work and the gang culture. Ok, maybe it’s not really like The Wire...

Blurb From the VHS Jacket: “New Jack City is a gangster movie for the ‘90s, a hard-hitting tale with a ‘gritty antidrug message’ (Roger Ebert, Siskel & Ebert). Ice T (his film debut), Judd Nelson and Mario Van Peebles (who also directs) portray policemen who lay it all on the line. Wesley Snipes is the angel-of-death kingpin with a city in his grasp.”

What Did I Learn?: Screaming “The World is Mine!” over and over again is a pretty good way to royally piss off your employees.

You Might Like This Movie If: You want to see the scene that gave rise to this spoof.


Really?: 1) Um... what exactly is a “New Jack cop”, or a “New Jack gangster”? New Jack was a late 1980s-early 1990s development in rap music. 2) So wait... the Cash Money Brothas are a criminal conspiracy; why in the fuck would anyone involved in it create specially-branded ball caps and jackets? 3) Holy shit, take a drink every time somebody adds the word “man” to a sentence. 4) Ok, let me get this straight...  Stone (Peebles) informs Scotty (Ice T) and Peretti (Nelson) they’re off the Nino Brown case. They stay on the case, which in the real world would get them fired, but never mind. Where do they get the flash money and drugs to convince Nino they’re the real deal? 5) You know... I’m not a mafia don or anything, but I’m pretty sure that if I ordered a hit on a powerful drug dealer, and it failed, I wouldn’t hang out with my entire crew on a patio, sipping coffee the very next day. Come on – would Tony Soprano be that dumb?

Rating: New Jack City is an enjoyable, but not-great time capsule from the very early 1990s. The film features some top-notch period rap music, as well as solid performances from Snipes and Ice T, and an absolutely outstanding one by Chris Rock(!) as an eager-to-please crackhead. New Jack City starts out with an explosive chase sequence, and then starts to drag as it focuses on Nino Brown conducting day-to-day business, and it also becomes increasingly difficult to suspend one’s sense of disbelief at times. 7/10 stars.