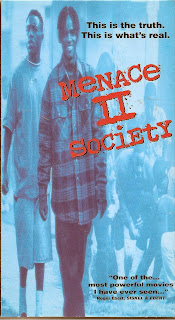 Synopsis: It’s a bit like Boyz ‘N The Hood... if that film were populated entirely by violent, narcissistic, trigger-happy, drug-dealing, gang-banging turds.

What Did I Learn?: If you have in your possession a security-camera videotape of you and a buddy robbing a liquor store and murdering its proprietors, your best course of action is to destroy the tape, not show if off to all of the neighbourhood knuckleheads.

Really?: 1) See “What Did I Learn?”. 2) If a gangbanger entered my car while I was stopped in the drive-thru, pointed a gun at my head and clearly commanded me to order a “double burger with cheese” for him, I don’t think I would forget to ask for the cheese.

Rating: It’s difficult to watch Menace II Society without comparing it to the superior Boyz ‘N’  The Hood – they both deal with growing up as young, black men in South Central LA in the early 1990s, but there’s a big difference. Tre from Boyz is a good kid trying to improve his situation, while Caine in Menace (brilliantly portrayed by Tyrin Turner) is a murderous criminal; by the end, it’s impossible to sympathize with him after his religious grandparents throw him out of their house, or after he’s beaten senseless by the thuggish cops. Menace II Society is a courageous, and unflinchingly realistic movie, but it gets increasingly tough to watch, or to give a shit about the protagonist. Oh – look for a short, but memorable cameo from Samuel L. Jackson. 7/10 stars.