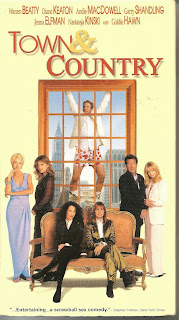 Synopsis: It’s an hour and 45 minutes of rich, self-absorbed 50-something turds sleeping around on each other.

Blurb From the VHS Jacket: “When revelations of his best friend’s affair drive wealthy architect Porter Stoddard to question his own life and marriage, the two pals go on a cross-country odyssey in search of some meaning to their rapidly disintegrating lives – or at least some hot babes.”

What Did I Learn?: Um... don’t even think about filming a movie until you have a finished script in the can.

You Might Like This Movie If: You figure it must be a full-length infomercial for these guys.


Really?: 1) So wait... Mona (Goldie Hawn) slept around on her gay husband – even with Porter – and this is never revealed? Even to Ellie (Diane Keaton)? 2) Hold on – I realize Porter (Warren Beatty) is a little pre-occupied with getting back into the awards ceremony to speak to Ellie, but his best friend (who recently invited him to spend some time in a cabin) just revealed that he’s gay, and he never once asks if dude was trying to put the moves on him?

Rating: Town and Country is a bad movie (see “What Did I Learn”) for a number of reasons: a) aside from a few lines from Garry Shandling, it isn’t funny; b) it isn’t deep or profound, c) it’s too long, and d) the script seems like a bunch of unconnected sequences thrown together. I cannot recommend this movie 3/10 stars.

Would It Work For a Bad Movie Night?: No...but take a drink every time every time Warren Beatty seems really, really apologetic about something...