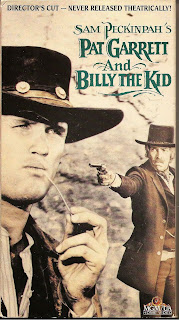 Synopsis: Vicious gun-for-hire hunts down irresponsible, murderous man-child on behalf of territorial government owned by oligarchic agri-businesses. [Um... are there any good guys in this movie?]

Blurb From the VHS Jacket: “James Coburn stars as Garrett, a cold-eyed cynic to whom survival in a changing world means putting on a badge and hunting down his old friend Billy. But the Kid, portrayed with an easy charm by Kris Kristofferson, sees it differently.”

What Did I Learn?: If a couple of outlaws (or, in this case an outlaw and an outlaw-turned-deputy-sheriff) agree to settle their differences with pistols-at-ten-paces, there’s a very good chance that one, or even both parties will renege on the arrangement.

You Might Like This Movie If: You’re a sucker for anything “Sam Peckinpah” created in the 1970s. / OR / You firmly believe Billy's surname was "TheKid".

Really?: 1) See “What Did I Learn”? 2) I realize the cattle barons threw their weight around in 1881 New Mexico, and acted like dicks, but did ordinary people actually side with Billy the Kid  just because he was an outlaw? I mean, he wasn’t exactly Robin Hood... 3) You know... if an old buddy pleaded with me to leave the country because he would be forced to return in five days to arrest (or shoot) my ass, I think I would take him seriously and get the fuck out of Dodge.

Rating: Pat Garrett and Billy the Kid (the 2-hour Director’s Cut version – not the much-shorter theatrical release that Peckinpah hated) is a cynical, but haunting and thought-provoking revisionist Western. It's hard not to feel a little depressed when you watch Slim Pickens' final scenes after getting shot. The film is certainly short on heroes, but we can sympathize with both title characters, played well by Coburn and Kristofferson (oh – and watch for Bob Dylan in a small role as Billy’s admirer/flunkey). My only real complaints are that the movie often drags, we know the ultimate fate of both men in the first few minutes, so there isn’t much suspense, and I didn’t enjoy Dylan’s musical contributions. 7/10 stars.