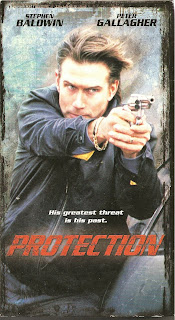 Blurb From the VHS Jacket: “His greatest threat is his past.”

What Did I Learn?: Apparently, the best way to befriend the local crime boss when you move to a new city is to: a) beat up his thugs, b) steal his cash, and c) return the money to him the very next day with a super-duper investment opportunity.


Really?: So, um...what happens to Ted (Peter Gallagher)? I mean, we discover that he’s mortgaged the house in order to help finance this development project, and then Sal and family have to suddenly split when his cover is blown? Does Ted go bankrupt? Does he get the money to finish the job?

Rating: If you’ve ever wanted to see Michael Corleone befriend George Bailey, you might get a kick out of Protection. Unfortunately, this film is nothing special: the script is predictable and dull, the acting - except for Gallagher - is over-the-top and terrible, and the conflict we expect (Ted confronting Sal about his efforts to finance their project through dirty money) never happens. Maybe this film could have worked better had it been told from Ted’s perspective... just a thought. I cannot recommend this movie. 5/10 stars.

Would It Work For a Bad Movie Night?: Take a drink every time Sal (Baldwin) tells somebody not to worry.