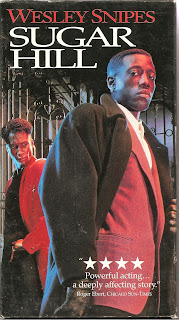 Synopsis: It’s basically New Jack City, except there aren’t any cops, and Nino Brown is a really nice guy.

Blurb From the VHS Jacket: “Wesley Snipes stars as the ruler of the streets in Harlem’s Sugar Hill. He’s a man desperate to escape his brutal legacy of violence and despair – even if it means abandoning his own flesh and blood.”

What Did I Learn?: If Ernie Hudson (best remembered as the black Ghostbuster) is the main villain in a movie, there’s a very good chance it will be mediocre at best.

Really?: 1) So..why does Raynathan agree to have dinner with his smackhead father when it’s obvious he hates him for the death of his mother, and simply throws vicious insults at the old man? It makes for a dramatic scene, but it would never happen. 2) I had a bit of trouble believing Melissa would have anything to do with Romello after seeing one of his henchmen strung up from a lamp-post. I also didn’t quite grasp the logic of her second relationship... the basketball star attempts to rape her, so she automatically runs back to Romello? Good Lord, why? 3) It’s nice that Romello and Melissa are able to find peace and serenity, but wouldn’t every gangster in the country be looking for them?

Rating: Ok, I was teasing when I wrote the “Synopsis” – while Wesley Snipes plays a Harlem-based drug dealer who’s in an uneasy partnership with his brother, that’s where the similarities to New Jack City end. Sugar Hill is overly long, the storyline is all build-up and no delivery, and the ending feels slapped-together – it’s as though the screenwriter had all of these sub-plots, and had no idea how to conclude everything except by killing everyone. Oh – and what’s the deal with the downbeat, depressing jazz score? I cannot recommend this movie. 5/10 stars.

Would It Work For a Bad Movie Night?: Take a drink every time Romello muses about getting out of the drug business – you’ll get hammered in a hurry.