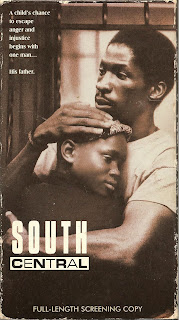 Blurb From the VHS Jacket: “A child’s chance to escape anger and injustice begins with one man... His father.”

What Did I Learn?: Small children will suddenly pay you a lot more respect if they know that you killed somebody back in the day.

You Might Like This Movie If: you want to learn more about one of America's most successful start-up enterprises.


Really?: 1) I realize Bobby is legitimately angry about Ray almost getting his son killed in a robbery ring, but he’s in prison, and the Deuces are his only protection against the other inmates. Why in the world would he talk shit about Ray and diss the Deuces in the prison yard? That’s just incredibly stupid. 2) I think it’s wonderful that Bobby gets paroled, and he’s determined to get his son out of the boys’ home, but what’s he going to do for money? He’s fresh out of jail and has no education.

Rating: South Central didn’t get a lot of publicity when it was released in 1992 (after the LA riots), which is a shame, because it’s a good film that provides both a rare glimpse into the early history of the Crips (called “Deuces” in the script) and a powerful message about staying away from drugs and crime; Bobby Johnson is the mirror image of Caine from Menace II Society: he starts out as an Original Gangster (“O.G.”) and comes to realize in prison that gangbanging will only get you killed, or locked up. The final scene is tension-filled, and well-acted. 8/10 stars.