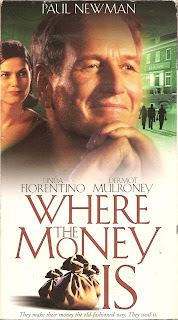 
I wanted to review some classic Canadiana (Goin’ Down the Road? Porky’s?), yet my collection of Canadian films is quite limited. Well, to be more precise, I currently don’t have any. So, the Paul Newman Film Fest continues into July. In the meantime, please click the link to read my review of Strange Brew).


Blurb From the VHS Jacket: “Cash. Moolah. Bucks. Dough. Bread. Loot. It’s called by many names but they all mean money, money, money. And this ‘gang’ – a veteran thief faking a stroke, his very sexy nurse, and her ernest but boring husband – is going after some.”


What Did I Learn?: Apparently, with the help of some extremely deep yoga, you can put yourself into such an all-consuming trance that you can feel nothing when poked by pins, show no reaction to a sudden loud noise, andcan even prevent your dick from getting hard during a lap dance.


You Might Like This Movie If: you think that faking a stroke – or a heart attack – qualifies as top-notch entertainment.


Really?: 1) See “What Did I Learn?”. 2) In the early part of the movie, Carol spends an awful lot of time trying to prove that Henry (Newman) is faking the stroke. Doesn’t she have other things to do during her shift? And would she continue her attempts after the lap dance incident? I certainly didn’t believe a nurse would pitch a patient into a nearby lake to force a reaction. 3) Hold on – Carol runs a prison transfer bus off the road, driving her own car, and not wearing a mask? Come on – really? She knows Henry is a master criminal; couldn’t she find some way to help him escape from jail without making herself a fugitive from justice?


Rating: Newman and Fiorentino share some nice chemistry in Where The Money Is, but it’s VERY slow moving, especially in the first act, and the film is constructed on a number of preposterous premises. While I consider Where the Money Is to a be an ok little caper film (and I am giving it a positive recommendation), I couldn’t shake a sense of Do I Really Want to See This?, as Henry (Newman) attempts to romance Carol, although he’s far too old for her, and it's quite obvious. Save this for a rainy Sunday evening. 6/10 stars.