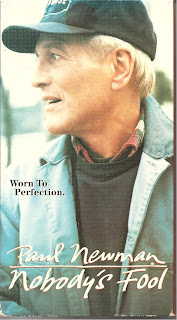 
Blurb From the VHS Jacket: “In his fortieth year of moviemaking, Paul Newman adds another milestone portrayal to his career in Nobody’s Fool, a luminous slice-of-life story set in a blue-collar upstate New York town and laced throughout with humor and heart.”


What Did I Learn?: Don't EVER ask a kid nicknamed "Whacker" how he acquired such a monicker.


You Might Like This Movie If: You know that Paul Newman is nobody's fool...but if he were, you would pity him.


Really?: 1) I had a bit of trouble believing the relationship between Sully (Newman) and Carl (Bruce Willis), the slimy local contractor... let's see: Sully sues Carl for injuries sustained during a job, yet agrees to work for him under the table? And then Sully steals Carl's snowblower not once, but twice, and Carl responds not by calling the cops, but stealing it back? 2) Hold on - Sully's son loses his job as an English professor in the city, and he decides to settle in town with one of his two sons in order to do handyman work? I realize his marriage is on the rocks, and he put himself through college by doing carpentry, but come on - wouldn't he at least go home and try to find a job there, instead? 3) Melanie Griffith offers to take Sully with her to Hawaii? Um...I'm not buying that one. And I certainly don't believe he would politely decline her offer.


Rating: Nobody's Fool is a warm-hearted, and often funny character-driven drama. Newman is gruff-but-kind-hearted ne'er-do-well (a marked contrast to his performance in Harry and Son, where he played a blue collar jerk), and he shares some great moments with Willis, the late Jessica Tandy as Sully's landlady, and a number of other characters in some wonderful scenes. The storyline is a bit contrived, so I can't give this movie a perfect score, but Nobody's Fool is still highly recommended. 9/10 stars.