Buffalo Bill and the Indians or Sitting Bull's History Lesson (1976) 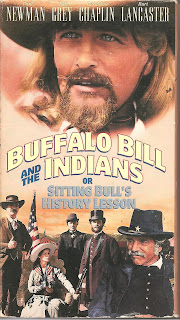 
Blurb From the VHS Jacket: “In this depiction of Buffalo Bill’s remarkable exploits, Paul Newman portrays the frontier hero with gusto, charm and tireless bravado. Although Buffalo Bill has fought Indians and Civil War battles, nothing can prepare him for his newest challenge: show business!”


What Did I Learn?: If you're dating a trick-shot sharpshooter, you really don't want to become part of his/her act - especially if you're banging somebody else on the side.


You Might Like This Movie If: You get a kick out of watching  assholes named Buffalo Bill. [I wanted to use the opening theme, but I couldn't find it. It's a shame this clip was cut from the DVD version of the show].


Really?: Hold on - wouldn't anyone in the show be a bit concerned about Sitting Bull getting close to President Grover Cleveland, considering: a) he spent years waging war against the US government, and b) Presidential assassinations weren't new in the 1880/1890s (Lincoln and Garfield come to mind). Wouldn't one of Cleveland's Secret Service goons likely shoot Sitting Bull during that strange moment in the performance? And come on - Cleveland won't even listen to Sitting Bull's request? That doesn't sound like good PR.


Rating: Buffalo Bill and the Indians or Sitting Bull's History Lesson (now that's a title!) is a strange film: revisionist Western, and sometimes-funny drama (although I wouldn't call it a comedy). Like many of Robert Altman's movies, BBATIOSBHL is a bit light on plot, as it focuses on interrelationships, and on many behind-the-scenes incidents within the wild west show, with a very loud and buffoonish Buffalo Bill at the center of things. The film is a bit of a mess, but enjoyable, and it boasts an impressive cast: Newman, Burt Lancaster, and Harvey Keitel to name a few. Check it out if you're interested. 7/10 stars.