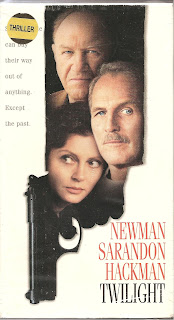 Paul Newman Film Fest Movie #14 (Rest assured, even though this film is titled Twilight, it has nothing to do with teenaged vampires. Oh, and please click the link to read my review of Night Moves, another detective film based on a Ross MacDonald novel, and also starring Gene Hackman in a role similar to Newman's.)


Blurb From the VHS Jacket: “Screen legend Paul Newman heads a luminous cast in this acclaimed whodunit packed with stars and suspense. He plays Harry Ross, a burned-out private eye who’s plunged into a murder mystery tied to a long-unsolved case of Hollywood dreams, schemes and cover-ups.”


What Did I Learn?: Guys, cops will be super-nice to you if they believe you've been shot in the crotch.


Really?: 1) See "What Did I Learn?" Come on - isn't it a well-worn trope that cops always harass private detectives in the movies? This might be the only film I've ever seen where they actually receive better-than-normal treatment. 2) Hold on - if Jeff and Gloria want Harry to deliver a message, why would they beat him unconscious and leave him under a pier just as the tide starts to come in? That's just dumb.


Rating: Twilight is a bit formulaic, but it's both an enjoyable mystery and an engaging character study of an over-the-hill detective that's reminiscent of the 1978 production of The Big Sleep.  And holy cow, what a cast: Newman, Hackman, James Garner, Susan Sarandon, and even Reese Witherspoon in a small role as a bratty teenaged daughter (even better, she has a topless scene!) Overall, not bad. 8/10 stars.