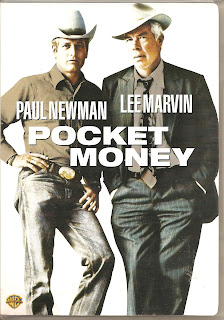 
Synopsis: It's like a sequel to Hud, except Newman is extra-stupid, and his best bud is a scuzzy, sharp-dressed dude who can't seem to grease any wheels.


Blurb From the DVD Jacket: “Newman and Marvin deliver a herd of cattle. And get a bum steer.”


What Did I Learn?: Throwing a television set out the nearest window is an effective means of gaining somebody's attention.


Really?: 1) Not too many men would wear a suit and tie on a cattle drive. 2) I realize Jim Kane (Newman) isn't the sharpest knife in the drawer, but it's tough to believe he would continue on his cattle-buying mission when it's obvious Garrett (Strother Martin) is trying to screw him over. Oh, and I had a lot of trouble believing Kane wouldn't simply hop into his truck and haul ass back to Texas when he's told the Mexican secret police want to throw him in jail.


Rating: I had mixed feelings as I watched Pocket Money; it's a sometimes-funny, often-charming character-driven drama featuring some amiable chemistry between Newman and Marvin. Unfortunately, the story never really goes anywhere, and Newman's character is so dumb that it gets annoying - it doesn't help that Newman adopts a nasally twang, and sounds suspiciously like George W. Bush at times. I'm giving this film an extra half-star because I also quite liked Carole King's lovely song. 6.5/10 stars.