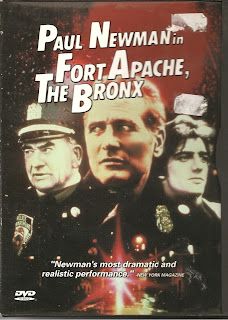 Paul Newman Film Fest Movie #20 (Dang - this would have been perfect for my salute to bad cops last year!)


Blurb From the DVD Jacket: “In a bombed-out wasteland stands a police station-less a precinct house than a fort in hostile territory. Outside its walls are the murders, the riots, the drugs, and the everyday lives that texture the bleak urban landscape. Inside, amidst corruption and indifference, each officer does what he must to survive his tour of duty in FORT APACHE, THE BRONX.”


What Did I Learn?: 1) According to Captain Dugan, back in 1981, the South Bronx consisted of a 40-block area with 70,000 people "packed in like sardines smelling each others' farts living like cockroaches." 2) Dropping an empty soda can into the collection jar is a great way of telling people you're disenchanted with your job.


Really?: 1) I realize this movie takes place pre-AIDS (well, before people knew what it was), but I had a bit of a hard time believing Murphy would continue to date Isabella (Rachel Ticotin) after seeing the needle marks on her legs. 2) Wait just a minute... the hooker who doubles as a serial killer (Pam Grier) is just a sub-plot? And the actual storyline (Murphy and his partner Corelli tackle corruption on the police force) doesn't materialize until late in the second act?


Rating: Fort Apache, the Bronx is a cynical, realistic, and compelling police drama, featuring believable dialogue, enjoyable buddy chemistry between Newman and Ken Wahl (best remembered as TV's Wiseguy), and a nice performance by Ed Asner as a hard-ass police captain. The film certainly has a few problems (see "Really?"), especially the surprising number of sub-plots and unresolved issues, but it's worth checking out, especially if you want to catch a glimpse of New York City in the pre-Guiliani years. 7.5/10 stars.