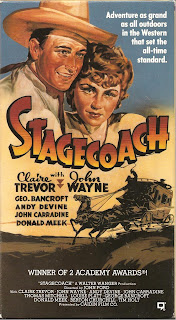 
Synopsis: Four decades (or over a century in movie years) before Clark W. Griswold and his family took that ill-fated trip to Wallyworld, John Wayne proved beyond a shadow of a doubt that cross-country land travel sucks, big time.


Blurb From the VHS Jacket: "All aboard for the most legendary ride in the West!"


What Did I Learn?: According to the Duke, you can't break out of jail and into society in the same week.


Really?: 1) I'm a little surprised the Indians didn't think of shooting the horses - that would have been an effective strategy for stopping the stagecoach.2) Holy cow - the Ringo Kid (Wayne) plays a huge role in getting the coach to safety, and then Gatewood tries to get him arrested when the reach town? I had a bit of trouble believing that. 3) Funny how the Apaches manage to shoot the least interesting/most inconsequential characters during their attack. 4) Hmm...throughout the film, everyone is concerned the Ringo Kid is going to get himself killed when he faces off against the Plummer gang, yet don't prove to be all that tough. The ending is a bit of a let-down.


Rating: With a few exceptions, I'm not a big fan of pre-1950s movies, so I was pleasantly surprised by Stagecoach; it's an interesting interplay of several very different (and quite troubled) characters as they travel through dangerous territory. Thomas Mitchell is a lot of fun as the nearly-always drunk Doctor Boone. 7.5/10 stars.