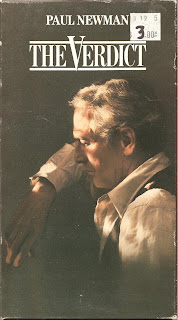 
Blurb From the VHS Jacket: “Paul Newman is brilliant in a powerful courtroom drama.”


What Did I Learn?: 1) If you ever want to track down somebody who doesn't wish to be found, you might try prying open the mailbox of that person's dear friend, and stealing their phone bill. 2) If you show up unannounced at a funeral and hand your business card out to bereaved family members, there's a very good chance that somebody's going to get pissed off.


Really?: 1) Come on... Galvin (Newman) doesn't tell his clients the hospital is willing to settle for $210,000? That's pretty irresponsible, even for a drunk lawyer. 2) Hold on - the audience isn't given the final dollar amount at the climax of the film? And I can think of a couple of other scenes that should have been included: a) the Archbishop was clear that this case should never have gone to trial, yet it does, and he never gets mad, and b) why doesn't Kevin Doneghy ever apologize to Galvin for taking a swing at him?


Rating: Written by David Mamet (although based on a novel by Barry Reed), The Verdict combines excellent dialogue with one of Paul Newman's best performances as a self-loathing drunk  who somehow finds the courage to do the right thing. The Verdict is not a fun movie - it's quite slow-moving, Galvin isn't the most likeable character of Newman's career, and it's much more of a character study than a plot-driven courtroom procedural, but it is a very good film. 8.5/10 stars.