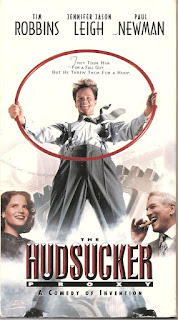 
Blurb From the VHS Jacket: “Mailroom clerk Norville Barnes is a rube, a schmoe, a grade-A ding-dong – precisely what Hudsucker Industries is looking for in a president! With him at the top, the stock will hit bottom.... and the fat cats on the board can snap up controlling interest.”


What Did I Learn?: If you ever want to convince somebody you're insane, show them a hand-drawn picture of a circle and call it your million-dollar idea.


You Might Like This Movie If: you've always wanted to see this turned into a full-length feature film.


Really?: The Hudsucker Proxy tries very hard to be a screwball comedy, so I can overlook a number of strange plot twists (including Waring Hudsucker coming back from the dead and preventing Norville from going splat on the sidewalk), but come on... 1) Norville (Tim Robbins) is already on his way out as President of the company. Why is it necessary to have him committed to an asylum? 2) Who, exactly is the bald guy, and why is he unaffected by the stoppage of time? And a fistfight with the kindly, omniscient black guy? That's original... 3) So, Norville solves all of his problems by showing off a letter from Waring Hudsucker? I can't imagine Sidney Musberger (Paul Newman) ever challenging THAT in court... 4) So, Norville confides everything about himself to Amy Archer (Jennifer Jason Leigh), it appears in print, and he has absolutely no idea his new employee might not be who she claims to be.


Rating: I had decidedly mixed feelings as I watched The Hudsucker Proxy. Visually, THP is quite beautiful (although it's sometimes tough to tell if it takes place in the art deco 1930s, or the official date of December, 1958... it doesn't seem terribly Fiftyish), and Jennifer Jason Leigh nearly steals the show with a fast-talking, tour-de-force performance as a tough female reporter with a heart of gold. Unfortunately, for a supposedly screwball comedy, The Hudsucker Proxy isn't terribly funny, aside from a sequence or two, and the audience isn't given many reasons to care about the characters; Robbins transforms from a loveable imbecile to a pompous asshole and back again, and Amy isn't a whole lot more sympathetic. It's not one of the Coen Brothers' better movies. 6/10 stars.