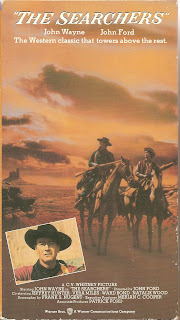 
Blurb From the VHS Jacket: “He lost one war. He wasn’t going to lose another.”


What Did I Learn?: Comanche Indians believe they need their eyes to get into the spirit world after death. So if you really want to fuck with them, desecrate a corpse or two.


Really?: 1) You know, five years is a loooooong time for Ethan to chase after a girl he barely met before the raid. 2) Funny how Ethan never has to pay out that reward for information - Futterman attempts to kill Ethan and Martin, and the Mexican refuses on the grounds that it's blood money.  3) So wait - Ethan and Martin spend five years together on Debbie's trail, Martin has a girl waiting for him at home, and Ethan STILL won't let him enjoy a glass of tequila?


Rating: I might have been a bit hasty last year when I called The Shootist "Wayne's best film", because The Searchers certainly gives it a run for its money. Beautifully filmed, The Searchers isn't a typical John Wayne Western; Ethan Edwards is a vicious (yet strangely sympathetic) racist, and easily Wayne's darkest role. The Duke gets a chance to act in this film, and he's quite good. The story is fairly straightforward: a tribe of Comanches kidnaps a young girl, and Ethan's rescue mission slowly turns into a gritty determination to kill her, rather than allow her to become part of the tribe. It's powerful and disturbing stuff, especially in a post-9/11 world, and the only thing preventing me from giving The Searchers a perfect score are the corn-pone comedy scenes featuring the nice Swedish family and the girl Martin leaves behind - they really don't fit well with the main storyline. Highly recommended. 9/10 stars.