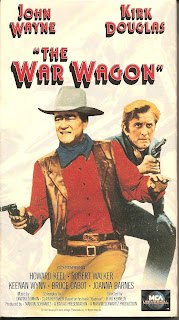 
Synopsis:  All-American champion of law, order, God, the flag and the Republican Party fights injustice in the Old West by, um... robbing an armored stagecoach?!?! And he's on parole?! WTF?


Blurb From the VHS Jacket: "John Wayne teams up with Kirk Douglas in The War Wagon, an action-packed western."


What Did I Learn?: Apparently, John Wayne wore the same pink-shirt, brown leather vest combo in every Western.

You Might Like This Movie If: You've always wanted to see the Duke as you've never seen him before.


Really?: 1) Is it just me, or does the War Wagon look as though it would tip over at the first sharp turn? 2) So, Indians can't tell the difference between gold dust and flour? 3) Gee... the heist conspiracy pretty much acknowledges that a lot of Indians are going to get shot before the War Wagon bites the dust. Sure, the Chief is more-or-less ok with sacrificing some of his men, but this seems ethically dubious. 4) So, Pierce could basically send Jackson (Wayne) back to jail at any point, and he doesn't take advantage of the situation?


Rating: The War Wagon is an odd little Western, in the sense that Wayne plays against type as an ex-con (albeit a framed ex-con, who was cheated out of his land by the villain) who plans and executes a heist with a little help from Kirk Douglas as a smartass gunslinger/safecracker, a boozy demolitions expert, and a few others. Wayne and Douglas work well together - in part because their characters aren't really friends, so much as rivals with a grudging respect for each other, and the film is a lot of fun. 8/10 stars.