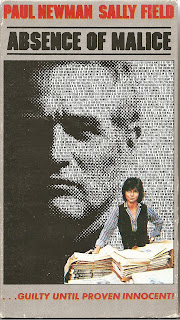 
Synopsis: Salt-of-the-Earth liquor wholesaler finds true romance with the spunky young reporter who ruins his business, drags his name through the mud, and provokes his sensitive, childhood friend to commit hari kari. What the [censored]?!?


Blurb From the VHS Jacket: “In America, can a man be guilty until proven innocent? Suppose you picked up this morning’s newspaper and your life was a front page headline...and everything they said was accurate but not true.”


What Did I Learn?: In Miami, the local newspapers will refer to sharks as "fish" so as not to scare the tourists.


Really?: 1) See "Synopsis". 2) See "What Did I Learn?" 3) So wait, Gallagher's childhood friend, Teresa, approaches Megan, tells her he has an alibi for the murder because he accompanied her to Atlanta for an abortion, and...she prints the story, even though Teresa has provided her absolutely no corroborating evidence? Is this woman America's worst reporter? 4) I had a great deal of trouble believing Megan would continue to speak to, let alone date Gallagher after he manhandles her in a fit of rage.


Rating: Absence of Malice is a long-forgotten, but still compelling drama from the early 1980s. AofM isn't a great film - it's quite slow-paced, and  there are times when it becomes difficult to buy into the storyline, but Newman and Field provide good performances, and Wilford Brimley is outstanding in a short, but highly-charged cameo appearance as a take-no-bullshit Justice Department honcho. I also liked the overall message of Absence of Malice: even relatively "mild", or supposedly harmless police harrassment of innocent people can ruin lives, and is unacceptable in a free society. 6.5/10 stars.