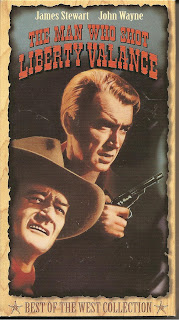 
Blurb From the VHS Jacket: “Ranking with Stagecoach as one of the greatest of its genre, The Man Who Shot Liberty Valance is the modern-day Western to beat all Westerns.”


What Did I Learn?: If somebody asks you to set some half-filled paint cans along a fence for target-shooting, don't do it, just don't.


You Might Like This Movie If: A certain song about life in the Old West means a great deal to you. [Ha - and you thought I was going to post THIS].


Really?: 1) Link Appleyard has to be the world's worst Marshall. Why does he have the job when it's obvious he has no intentions of ever standing up to Valance? 2) Funny how young Pompey is as bald as a cue ball, yet he has a head of white hair in the scenes that take place years later. 3) If Tom resents Ranse for stealing his girl, you have to wonder why he does him such a huge favour near the end... is out of his dislike for Liberty Valance? Does he secretly admire Ranse's courage, and wants to help him out?


Rating: The Man Who Shot Liberty Valance is a magnificent western featuring two very different types of hero - who don't particularly like each other for good reason - and one of the all-time nastiest villains to ever grace the silver screen. It's a thought-provoking movie, with a number of themes: the meaning of courage, Western America's transition from lawless frontier, and the myth-making of later years. The film has some problems: it was shot in black and white, mostly on soundstages without natural scenery, there isn't a lot of action, and both Wayne and Stewart are far too old to portray young men. Still, The Man Who Shot Liberty Valance is highly recommended. 9/10 stars.