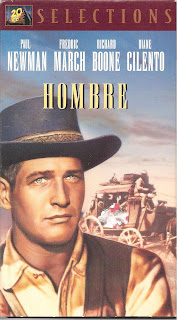 
Blurb From the VHS Jacket: “John Russell (PAUL NEWMAN), a white man raised by a band of Arizona Apaches, is forced to confront the society he despises when he sells the boarding house his father has left him. While leaving town by stagecoach, several bigoted passengers insist he ride outside with the driver (MARTIN BALSAM). But when outlaws leave them all stranded in the desert, Russell may be their only hope for survival!”


What Did I Learn?: If you don't carry a firearm, some gun-toting thug will take away your bus ticket in front of everyone, and nobody - not even the cops - will lift a finger on your behalf.


You Might Like This Movie If: You've always wanted to see William Shatner's The White Comanche remade with, um... better actors.


Really?: 1) I'm still shaking my head about the moment when Mendez (Martin Balsam) tells the outlaws they'll never get away with a stagecoach robbery because there are seven witnesses present. WTF?!? They're in the middle of nowhere, and he basically announces: "you're going to have to kill us, now". 2) So...was it common for illegitimate Caucasian kids to be sent to live on Indian reservations? That seems a bit far-fetched. 3) See "What Did I Learn?" - the dude was a soldier, for crying out loud!


Rating: Hombre isn't exactly the right vehicle for Newman, as John Russell is a man of few words, and it takes awhile for the story to get going, but it's an enjoyable Western and Richard Boone provides a memorable performance as the truly nasty Cicero Grimes. 8/10 stars.