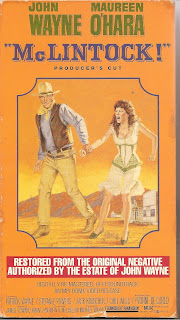 
Synopsis: It's a Western version of The Taming of the Shrew, with corn-pone slapstick comedy and a creepy celebration of domestic violence.


Blurb From the VHS Jacket: "Three decades after its original theatrical release, one of the most sought after motion pictures in the history of home video has finally arrived."

What Did I Learn?: In the Old West, cowboys apparently got into fistfights two or three times a day, and never suffered any serious brain or bodily injuries.


Really?: Ho-ly shit. I'm not a raging feminist by ANY stretch of the imagination, but this movie is too much... I can't believe G.W. (Wayne) would allow an employee to spank his daughter with an iron shovel. And then the movie ends with Wayne chasing his (admittedly nasty) wife around town, putting her over his knee, and spanking her with a similar shovel to the roaring approval of several hundred ass-kissing witnesses.


Rating: If your idea of hilarity is to watch John Wayne fall down the stairs (or into a giant mudhole) about 17 or 18 times, you'll find "McLintock!" to be a laugh riot. Personally, I think this film is atrocious; there's nothing funny about wife-beating (see "What Did I Learn?"), but the movie has other problems, too: Wayne's ultra-conservative views are presented with all the subtlety of a dumptruck (the oily governor of the territory is named "Cuthbert H. Humphrey"), and the humour is simply loud and stupid. I'll give "McLintock!" two stars for the mudhole scene, but Jeez...I cannot recommend this movie. 2/10 stars.

Would It Work For a Bad Movie Night?: Take a drink every time the Duke opines on the evils of charity.