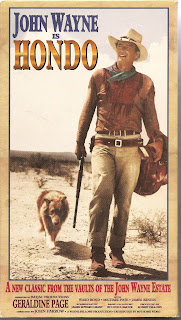 
Synopsis:  Half-Native American cowpoke rescues troubled family in Apache territory, and... oh whatever. It's another John Wayne movie where he swaggers, shoots everyone, and bloviates a bunch of pithy-yet-questionable maxims.


Blurb From the VHS Jacket: "The year is 1874, and the whites have broken their treaty with the Apache Nation. Hondo Lane (John Wayne), a US Cavalry dispatch rider, encounters a young woman (Geraldine Page) and her son, living along in Apache territory. Hondo, half-Indian himself, is troubled at having to fight his brethren in an all-out uprising."


What Did I Learn?: According to Hondo, "everybody gets dead."


Really?: 1) Does anyone think Wayne looks half-Indian? Anyone? 2) I have to say the last few minutes of the film are a bit pat and unconvincing; I had a hard time believing a half-Apache would comment (without any passion): "end of a way of life", and then ride merrily to California knowing full well the US Cavalry is on its way to wipe out the remaining warriors.


Rating: Clocking in at 83 minutes, Hondo is one of Wayne's shorter-but-better Westerns; he and Geraldine Page share some steamy chemistry, and the film takes a nuanced, and surprisingly respectful view of the Apaches, even though they are the main "villains" in the movie. Much like Robert Shaw's Sheriff of Nottingham in Robin and Marian, the Apache Chief Vittorio (Michael Pate), comes across as a fair, and honourable man, especially when he takes Angie's (Page) son under his wing. 8/10 stars.