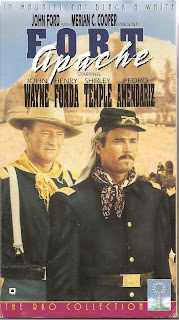 
Blurb From the VHS Jacket: “Colonel John Thursday (Henry Fonda) is an embittered man. Despite an excellent war record, he’s stuck with the command of Fort Apache, a remote southwest garrison. So Thursday comes up with a scheme to make his reputation as an Indian fighter. Captain York (John Wayne), a bootstrap veteran of many Indian campaigns, knows Thursday’s plan means disaster.”


What Did I Learn?: When you're negotiating with a hostile tribe, it's not a great idea to tell them you think they are "without honour."


Really?: 1) Hold on - the Army's method of training cavalrymen was to introduce the recruit to a horse and say: "get on"? Did these guys receive any training in combat riding? 2) Somebody mentions that Lt. Colonel Thursday was once a General - why did he lose that rank? What happened? Come to think of it, how did Sergeant-Major O'Rourke lose his rank of Major? 3) I had a hard time believing Captain York wouldn't give Thursday an informal briefing about the Fort, and why he's headed for disaster.


Rating: The best parts of Fort Apache are the conflicts between Thursday and York - the ambitious, spit-and-polish superior officer versus the grizzled, and realistic captain. Unfortunately, the main storyline is downplayed, so the audience is treated to a whole lot of slapstick comedy from the Irish sergeants, too many fancy dress balls, and to a boring romance between Thursday's daughter (played by an older Shirley Temple) and a young officer. The result is a mish-mash that only occasionally works. 5.5/10 stars.