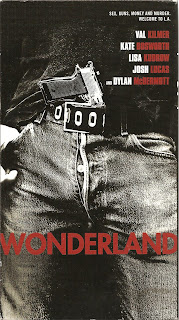 This movie would have been perfect for my salute to addiction flicks a couple of years ago!

Synopsis: Scumbag A breaks into the home of Scumbag B, and rips him off. Scumbag B retaliates by icing Scumbag A and his buddies. Scumbag C (a friend of A) claims the entire thing was orchestrated by Scumbag D. Not surprisingly, Scumbag D replies that Scumbag C is a lying piece of you-know-what.


What Did I Learn?: If you sell cocaine, DON'T hang out with your cokehead clients. And if you're dumb enough to invite them into your place, for fuck's sake don't even THINK about revealing the existence or location of your personal safe.


You Might Like This Movie If: You really want to see something unfortunate take place on Canada Day at Wonderland.


Really?: Wonderland is based upon a real-life crime, and it seems pretty true-to-form. That said, it seems bizarre that John Holmes would knock on Eddie Nash's door after the robberies, and guess what - according to imdb.com, he didn't. Nash's buddies saw him wearing some jewelry from the rip-off, and accosted him.


Rating: Wonderland is scuzzy with a capital S. The film opens with a difficult-to-watch scene involving Holmes' girlfriend taking advantage of the hospitality of a religious do-gooder (Carrie Fisher), but soon after becomes a compelling crime drama. Its biggest problem, however, is that none of the main characters are even remotely likeable (which wouldn't be a problem, except they aren't terribly interesting, either - cokeheads and thugs, mostly), so it's tough to give a crap about any of them. 7/10 stars.