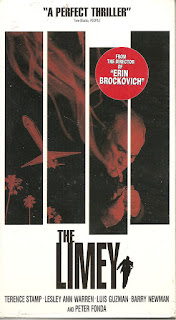 
You Might Like This Movie If: Your favourite 1980s family sitcom wasn’t The Cosby Show, Family Ties or Growing Pains.


Really?: 1) I had a bit of trouble believing Eduardo and Elaine (Luis Guzman and Lesley Ann Warren) would continue to help Wilson when it becomes obvious he’s in town to kill people. 2) So wait – all that Valentine had to do was explain the situation to Wilson? 3) Hold on – did Wilson bust out of jail in England to avenge his daughter’s murder in LA? And I’m a bit surprised the DEA agents didn’t fingerprint him after the failed assassination attempt.


Rating: The Limey is definitely the best of the three ‘revenge’-themed movies I have reviewed; Stamp is quite good as the single-minded, but dangerous Brit, but Peter Fonda provides an outstanding performance as the creepy-yet-charming, record-promoter-turned-drug-kingpin, Terry Valentine – he nails the part. The film has a few too many flashbacks for my taste, but it’s an entertaining hour and a half, and well worth watching. 8/10 stars.