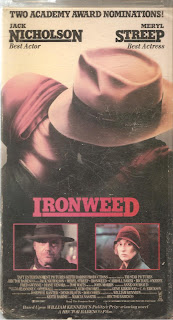 Dang – this would have been perfect for my tribute to “addiction” movies.


Blurb From the VHS Jacket: “It’s winter, 1938 in Albany, New York. The soup kitchens and flophouses are overflowing with homeless street people seeking food and refuge from the unforgiving cold. Francis Phelan (NICHOLSON) wanders the streets, back in his hometown after 22 years, an aimless vagabond ready to confront the family he abandoned long ago. While sharing his whiskey with longtime ‘pal’ Helen (STREEP) Francis reveals the dark secrets of his past, the painful memories from which he once tried to escape... but now must reconcile.”


What Did I Learn?: 1) If you’re coming home for the first time after abandoning your family 22 years earlier, it’s a nice idea to put on a clean shirt and bring a turkey. 2) Herman Munster (Fred Gwynne) had a nice singing voice – who knew?


Really?: I realize Francis feels out of place in the family home, but I had a little trouble believing he would choose to return to sleeping outside and scrounging for food and booze when it’s obvious his ex-wife wants him to come in from the cold.


Rating: Ironweed is a powerful – albeit extremely depressing – film. I’m not a big Jack Nicholson fan, but he and Meryl Streep deliver outstanding performances; the scene of Francis visiting the grave of the infant son he accidentally killed years earlier is one I won’t forget any time soon. With a running time of 143 minutes, however, the movie is far too long, and it could have used both a tighter focus and an editing job. Interestingly, while the movie takes place during the last years of the Great Depression, Francis and Helen aren’t exactly what politicians call the “deserving poor” – they’re alcoholics, and it’s strongly implied that Francis could probably get his life together if he gives up on the booze. 8.5/10 stars.