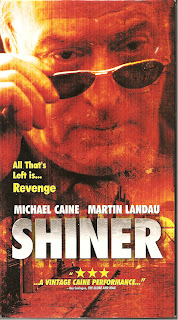 Revenge Movie #1 (Now that Christmas is over, I figured it’s time to do a three-movie tribute to one of mankind’s oldest desires – a little bit of payback).


Synopsis: World’s most gullible boxing promoter solves mysterious murder by beating the crap out of anyone he suspects is even remotely involved.


Blurb From the VHS Jacket: “Michael Caine stars as Billy ‘Shiner’ Simpson, an East End boxing promoter with big ideas. Putting his own son Eddie ‘Golden Boy’ up against the American champion, he has gambled everything on the outcome. When Eddie loses and then is brutally murdered Shiner’s world disintegrates. Distraught, Billy begins a frantic search for the killer, but his past is catching up with him, and so are the police.”


What Did I Learn?: Apparently, you can sweet-talk the police into postponing their plans to arrest you by insisting: a) you didn’t do it, and b) tonight’s event is really, really important.


You Might Like This Movie If: You’re glad it’s a work of fiction, and that boxing promoters aren’t nearly as slimy as they’re portrayed here.


Really?: 1) Apparently, London is awash in firearms – everyone seems to have one. 2) There are many, many examples in this movie of people not acting the way they would in real-life. If a man with a gun orders you to get back into your car, for instance, the chances are pretty good that you’re going to scurry away lickity-split – you won’t have to wait for him to fire a shot into the air. More importantly, why would a jaded boxing promoter (a man who is presumably more of a realist than Henry Kissinger) bet everything on his son defeating the American light-heavyweight champion?


Rating: Shiner isn’t quite a bad movie, but it it’s not a good one, either. Caine’s character isn’t even remotely likeable (he threatens to kill a henchman’s unborn child, for crying out loud!), even after his son is murdered and he’s devastated by the news. While the first half of the film has some comic moments, and provides an interesting take on the boxing world, the second half is essentially Get Carter, with a couple of hired goons thrown in. 5.5/10 stars.