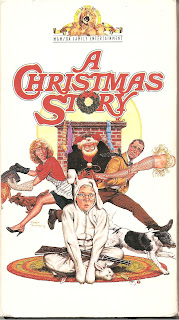 
Blurb From the VHS Jacket: “The Christmas spirit soars to live in this hilarious holiday gem. With sly and gentle satire, this delightful film paints a ‘jaunty Rockwell-like portrait of Middle America... all at once amusing, provoking and heartwarming. (The Hollywood Reporter).”


What Did I Learn?: 1) Apparently, Palmolive tastes a whole lot better than Lifebuoy soap. 2) If somebody “triple-dog dares” you to do something incredibly stupid, the best reply is: “go fuck yourself”.


Really?: 1) I had a bit of trouble believing Ralphie’s mom would allow a stocking-hosed leg lamp to be placed in the middle of her living room window.2) Would an aunt really give a pink bunny suit to a little boy? And would a department store Santa really deliver a boot to the face of that same boy with hundreds of eyewitnesses nearby?


Rating: A Christmas Story is a warm and funny holiday film, told from a child’s perspective sometime in the 1940s. It’s very difficult to knock A Christmas Story, but my only complaint would be that it doesn’t entirely know what sort of film it wants to be: a zany comedy aimed at kids (the neighbour’s dogs running through the house, Ralphie’s frequent daydream sequences, etc...) or a nostalgic comedy-drama for folks who grew up in that era – it often tries to be both, and that combination doesn’t always work. Since the film is narrated by an older Ralphie, I would I have liked to see a bit more introspection, commentary about the times, and information about what happened to the on-screen characters; that said, such an approach probably would have made A Christmas Story a much different movie. 8.5/10 stars.