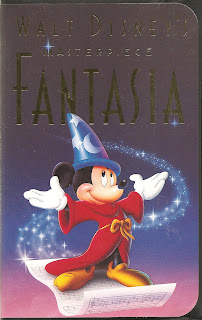 Christmas Movie #3 (Ok, Fantasia isn’t really a Christmas movie per se, but it was re-released every year around Christmastime when I was a kid, so I guess it sort-of counts)


Blurb From the VHS Jacket: “Walt Disney’s most celebrated, most acclaimed and most requested film is finally here...FANTASIA!”


Really?: 1) Considering he had no trouble removing all of that excess water with a little hocus-pocus, I’m surprised the sorcerer gets as angry as he does at Mickey. 2) So wait – bare-breasted female centaurs? Hippos dancing with alligators? Mountain tops thatturn into Satanic figures? What the fuck is this movie?


Rating: Fantasia is one weird, trippy film. Set to several pieces of classical music, the movie consists of animated images and short stories without dialogue. While Fantasia is  highly imaginative, and it features beautiful artwork, the viewer is often left wondering: “what in the world am I watching?” My recommendation would be to screen it without sound for a social gathering, put on some Pink Floyd and fire up a joint or two. 8/10 stars.