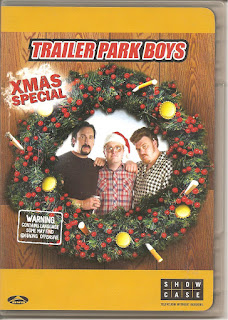 Christmas Movie #10 (Click the link to read my review of The Trailer Park Boys: Countdown to LiquorDay).


Blurb From the DVD Jacket: “in this prequel to the hit series Trailer Park Boys, it’s 1997 and Sunnyvale Trailer Park is getting ready for the holiday season. Julian’s got a great idea to make money this Christmas, Ricky gets confused between God and Santa, and Bubbles tries to get the Boys together for an annual Christmas bonfire.”


What Did I Learn?: 1) Jail is awesome; 2) Santa Claus isn’t God; 3) Christmas is for getting drunk and stoned with the ones you love.


You Might Like This Movie If: You enjoy clever and witty repartee worthy of the Algonquin Roundtable.


Really?: The Trailer Park Boys isn’t meant to be taken all that seriously, so I guess I can overlook the big jailhouse party, the priest who admits that he’s high during Midnight Mass, or the fact that Randy doesn’t wear shirts, even in the winter, but why are the characters interviewed, documentary-style? I thought the filmmakers started following Julian and Ricky at the beginning of Season One, which takes place several years in the future.


Rating: Made in 2004, The Trailer Park Boys Christmas Special dates back to a time when the show was still funny (don’t get me started on the later seasons...) As usual, Ricky (Robb Wells) is a hoot, especially when he matches wits with Lahey, or as he gradually destroys his 1975 Chrysler New Yorker with one accident after another. While I’m not a fan of “very special episodes”, the Bubbles sub-plot is actually quite touching. 8/10 stars.