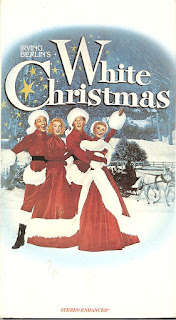 
Blurb From the VHS Jacket: “White Christmas is a treasury of Irving Berlin classics, among them ‘Count Your Blessings Instead of Sheep’, ‘Sisters’, ‘Blue Skies’, and the beloved holiday song, ‘White Christmas.’”


What Did I Learn?: Every single episode of Three’s Company was based on a moment in this film when the Innkeeper’s receptionist overhears bits and pieces of Bing’s telephone conversation, and comes to a completely wrong-headed conclusion.


You Might Like This Movie If: You know that Bing Crosby is a cool, all-around great guy.


Really?:  1) In the opening War in Europe scene, the soldiers are wearing the cleanest uniforms this side of the costume department. 2) Bing and Danny do a number in drag – yeesh. Oh, and how many times does the audience have to hear that fucking “Sisters” song? 3) Bing and Danny do a minstrel show...a MINSTREL SHOW. 3) So wait – the receptionist makes a wrong-headed assumption, and yet later she’s clearly in on the plan to keep the General away from the TV set. Something doesn’t compute. 4) I have to wonder: where in the world did all of Wallace and Davis’ backup dancers, stage hands, musicians, etc stay in Vermont? There’s no way that inn had even nearly enough rooms for that travelling circus. 5) Gee, who wouldn’t willingly give up their Christmas plans with family in order to put on a military uniform, trek up to Vermont, and honour the guy responsible for their post-traumatic stress disorder?


Rating: White Christmas is generally considered a holiday classic, but I found it tedious, overly long, and just plain stupid in places. Even as a musical, White Christmas isn’t terribly entertaining; many of the songs are less than inspired (“What can you do with a general?”, being a prime example), and we hear some of them over and over again until it just isn’t funny. I cannot recommend this movie. 4/10 stars.


Would it Work For a BAD MOVIE NIGHT?: Nope