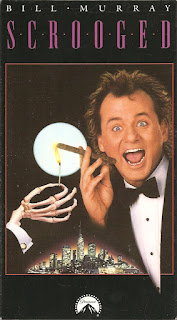 Christmas Movie #9 (By the way: back in January, when I reviewed Nostradamus, I jokingly suggested you might like that film if you strongly suspected there wouldn't be a blog entry on December 22. Well, I'm happy to report the end of the Mayan calendar came and went, the world seems pretty much intact, and I’m still blogging)


Blurb From the VHS Jacket: “High-spirited high jinks on Christmas Eve put Frank Cross (Bill Murray) in a ghostly time warp in this hilarious take-off of Charles Dickens’ ‘A Christmas Carol’. Cross, who has made the meteoric rise from the depths of the mailroom to TV network president, is mean, nasty, uncaring, unforgiving and has a sadistic sense of humour – perfect qualities for a modern-day Scrooge.”


What Did I Learn?: 1) No matter how hard you try, you can’t punch out the Ghost of Christmas Present. 2) Towels and chopped veal are pretty crappy gifts.


Really?: 1) As the personal secretary to a big network honcho, wouldn’t Grace (Alfre Woodard) be able to afford something a bit nicer than a housing project apartment in Harlem? This carryover from A Christmas Carol doesn’t exactly ring true. 2) So, Eliot Laudermilk goes from network strategist to alcoholic, homeless bum in what – a day? 3) A LIVE TV broadcast? Oh, come on...


Rating: I’m a big Bill Murray fan, and there’s no doubt he delivers a top-notch, tour-de-force performance in Scrooged. That said, the movie starts with a lot of energy and creativity (I love the Lee Majors “The Night the Reindeer Died” opening skit), turns strangely dark, and ends with a highly uncreative and insincere forced sing-a-long to a bad song; I guess Richard Donner needed an ending, and that was the best he could envision. Moreover, the Scrooge redemption story doesn’t work that well when it’s peppered with smug one-liners throughout. Scrooged is an ok, but not great Christmas film. 6.5/10 stars.