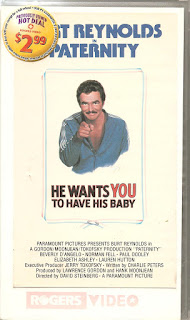 Synopsis: Burt Reynolds is a high-powered corporate executive who wants a son. Beverly D’Angelo is a cute waitress who needs money to go to Paris, so she agrees to act as a surrogate mom. He’s a little anal-retentive, she’s a little kooky, and... Take a wild fucking guess how this ends up...


Blurb From the VHS Jacket: “Burt Reynolds brings his magnetism and charm to the role of a would-be bachelor father in this sophisticated comedy. The problem: at 44, having lived a life of swinging singledom and wanting it to stay that way. Reynolds also wants a piece of immortality. He wants a child. The solution? A surrogate mother. No strings, no commitments.”


What Did I Learn?: Burt Reynolds is at his best when he’s driving muscle cars away from angry sheriffs...he’s not so great playing sensitive yuppies.


Really?: 1) I realize this movie was made in 1981, a time long before child molesters were suspected of lurking in every alleyway, but some of the scenes of Burt befriending strange kids in the park are a little creepy. 2) So, is Burt some sort of fussy, anal-retentive weirdo, or a ladies’ man who can’t settle down? For some reason, his character is presented as a combination of both, and it doesn’t work. 3) “Sophisticated Comedy”? Oh, come on...


Rating: Paternity is a terrible film – even the opening credits, featuring the cries of several babies, are unwatchable. Burt and Beverly do their best with the material, but it isn’t terribly funny, and – even worse – the script is sooooooooo incredibly predictable. You know D’Angelo is going to accept Burt’s offer (leaving him free to proposition a number of women and get slapped, earlier on), you know they’re going to bicker, you know she’s going to leave him and he’ll realize he really loves her, blah blah blah... I cannot recommend this movie. 3/10 stars.


Would it Work for a BAD MOVIE NIGHT?: No way, Jose.