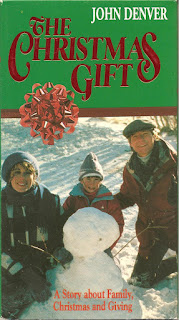 
Blurb From the VHS Jacket: “George Billings is a successful New York City architect. One year ago, at Christmastime, his beloved wife died. So now the usually joyous season is a time of painful memories for George and his seven-year-old daughter Alexandra. To make matters worse, George’s boss, Mr. Renfield, sends him on a business trip to look over a small Colorado town for a possible real estate development.”


What Did I Learn?: Land developers are evil, and every town should remain exactly the way it is right now.


You Might Like This Movie If: You really want to watch John Denver put the moves on a hot chick at Christmastime.


Really?: 1) It’s funny how George suddenly changes his opinion about urban development; mid-way through, he argues Georgetown will wither and die, just like his home in Nebraska, if it doesn’t develop. Later, he believes his boss’ plans will destroy the town. 2) Wait – everyone in town believes in Santa Claus because there’s a legend he appeared 100 years ago, and HE NEVER MAKES AN APPEARANCE IN THIS MOVIE? That’s like making vampire movie without a vampire. 3) John Denver breaks into song, just as he’s tucking his daughter into bed. If the director, Michael Pressman, wanted to include an original ditty, how about playing it over a video montage? 4) Wouldn’t anyone in town stand to benefit from a whole bunch of new condos and ski chalets being built nearby?


Rating: Made-for-TV movies can be decidedly hit or miss. While The Gathering is a great little film, The Christmas Gift is schmaltzy, simplistic, difficult to believe, and rather unsatisfying. Give this Rocky Mountain High a pass and watch John Denver and the Muppets: A Christmas Together, instead.  I cannot recommend this movie. 5/10 stars.


Would it Work For a BAD MOVIE NIGHT?: Not really