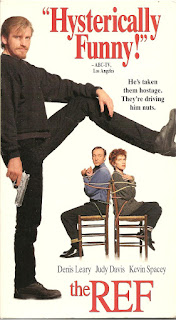 
Blurb From the VHS Jacket: “MTV’s Denis Leary stars in one of the year’s most outrageous and highly acclaimed comedy hits. Leary plays an unfortunate cat burglar who becomes trapped in a fate worse than jail when he takes a bickering couple (Kevin Spacey – Consenting Adults, Judy Davis – Husbands and Wives) and their annoying relatives hostage. Before long, they’re driving him nuts, and the line between who is whose hostage begins to blur.”


What Did I Learn?: A whole lot about the life of St. Lucia...oh, and that nobody particularly wants to wear a candle-laden wreath on their head as they sit down for Christmas dinner.


You Might Like This Movie If: You know this is all a work of fiction – Denis Leary would NEVER steal something that didn’t belong to him!


Really?: 1) Couldn’t Lloyd (Spacey) have come up with a better lie than to attempt to pass off Gus (Leary) as “Dr. Wong”? 2) Can police officers in the US conduct house-to-house searches without the owner’s consent? 3) Wasn’t it pretty obvious mid-way that Gus wasn’t going to shoot anyone? 4) Not too many people befriend the guy who sticks a gun in their back and orders them around.


Rating: While it’s highly contrived, and the sub-plot about the blackmailing kid is a bit superfluous, The Ref is a funny, and strangely charming film featuring great chemistry between Leary, Spacey and Judy Davis. 7.5/10 stars.