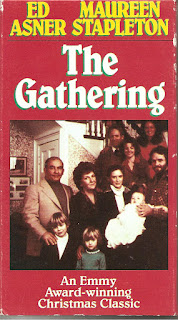 
Synopsis: Lou Grant wants one last tree-trimming before he croaks.


Blurb From the VHS Jacket: “Adam is a man whose time is running out and for whom life has saved the very best for last. Ed Asner and Maureen Stapleton star in this poignant Emmy Award-winning Christmas special that has already become a seasonal classic.”


What Did I Learn?: According to the Adam Thornton: “that whole New England winter feeling has gone to plastic pine trees, electronic music, smog and black slush.”


You Might Like This Movie If: You enjoy watching a touching moment or two at a big, family Christmas get-together.


Really?: 1) For a guy who’s about to kick the bucket within three months, Thornton (Asner) never shows any symptoms of being ill. Come to think of it, his doctor never actually states the illness. 2) It’s funny Kate (Maureen Stapleton) never seems the slightest bit angry at Adam, even though he stormed out of the family home years earlier and left her there, alone.


Rating: The Gathering is a heartwarming, and very bittersweet Christmas film featuring fine performances from Asner and Stapleton. While it was made for TV, and the production values aren’t the best, it is well worth watching around this time of year and the film richly deserved its Emmy. My one complaint is that the dialogue often sounds “written”, instead of authentic speech. 8.5/10 stars.