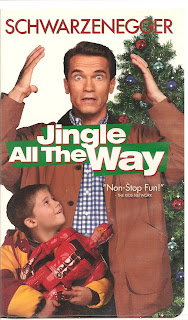 Christmas Movie #1 Please click the links to read my reviews of The Ice Harvest, and Friday After Next (both films take place at Christmastime). On December 25, I will re-post the links to the Holiday movies I reviewed last year.
Synopsis: Muscle-headed oaf attempts to further spoil an already petulant child.
Blurb From the VHS Jacket: “Arnold Schwarzenegger stars in this hilarious holiday comedy as a father desperate to buy that must-have Christmas toy during a frantic last-minute shopping spree on Christmas eve.”
What Did I Learn?: 1) Sinbad frequently confuses being loud with being funny. 2) If you don’t spend enough time with your kid, you can make up for it by buying him a popular toy.
You Might Like This Movie If: You believe Ahhhold is a great role model for kids.
Really?: 1) Once again, Arnie plays a Mid-Western American with a WASP-y name (“Howard Langston”) and there’s absolutely no explanation for why he has a thick-as-molasses Austrian accent. 2) Of all the Christmas movies they could have ripped off, why did they choose Santa With Muscles? 3) He. Punches. A. Reindeer. 4) Allowing a bomb to explode in the hands of a police officer might have been in bad taste. 5) So wait – a parade float character is given a working jet pack? 6) So, is Myron (Sinbad) a comical character, a villain, or what, exactly? While I can see him maybe being obsessed with getting a Turboman doll for his son, I had a very hard time believing he wouldn’t immediately shift his priorities to saving Jamie’s life when the two of them are suspended from a multi-story building. 7) What’s with all the dwarf-tossing?
Rating: While Jingle All the Way has a few amusing lines (I love it when the late, great Phil Hartman says to Arnie: “you can’t bench-press your way out of this one”, or when Arnie yells: “PUT THAT COOKIE DOWN! NOW”), it’s mostly an unfunny, mean-spirited and unpleasant “satire” of crazed shopping that nevertheless revels in materialism, and doesn’t even attempt to challenge the commercialization of Christmas. Frankly, I expected more from a comedy that features Hartman, and that reunites Ahhnold with his Red Heat co-star Jim Belushi. And the final sequence involving a working jet-pack in the Santa Claus parade is so over-the-top that it becomes impossible to suspend one’s sense of disbelief. I cannot recommend this movie. 5/10 stars.
Would it Work For a BAD MOVIE NIGHT: A gang of 12-year olds might enjoy Jingle All the Way for a sleepover, but adults? Not so much…
http://www.imdb.com/title/tt0116705/