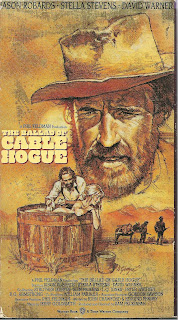 Synopsis: Grizzled old bastard survives – and thrives – in the desert by um...uh... selling a basic human right to desperate people? What a creep!

What Did I Learn?:  The best response to “Vengeance is mine, sayeth the Lord” is: “Well, that’s fair enough with me... just as long as he don’t take too long and I can watch.”

Really?: 1) It’s awfully kind of Cable to spare Bowen’s life, but did he have to essentially give him the watering hole? 2) So wait – Joshua is hiding out in Cable’s house because there’s a man outside who wants to kill him, and he hits on Cable’s girl, Hildy? It makes for a funny scene, but that seems incredibly short-sighted and dangerous. And hey – I thought he and Cable were buddies. 3) I really didn’t need to hear Jason Robards sing: “Butterfly Mornings.”

Rating: Sam Peckinpah apparently felt The Ballad of Cable Hogue was his best film, and even better than his much-more-famous Wild Bunch. It’s a good movie – Robards is wonderful as the title character, and David Warner does a memorable turn as a lusty (and not terribly trust-worthy) preacher, but it tends to drag in places, especially near the end. The Ballad of Cable Hogue is also very different from The Wild Bunch in the sense that there isn’t a lot of action, and things occasionally get psychedelic and weird. 8/10 stars.