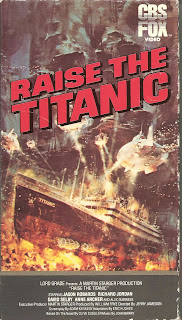 Blurb From the VHS Jacket: “An all-star cast embarks on a tension-filled expedition to locate the infamous luxury liner and the destructive secret it holds.”

What Did I Learn?: “Dirk Pitt” sounds like the name of a pirate.

You Might Like This Movie If: You figure the statute of limitations has long-since expired, and it's ok to poke some fun at a disaster that killed about 1,500 people.
Really?: 1) So, what’s the point of the love triangle between Dana (Anne Archer), Dirk (Richard Jordan) and Gene (David Selby)? She’s barely in this movie, and nothing ever gets resolved. 2) If this “Byzanium” stuff is even more powerful than plutonium, why doesn’t anyone ever wear a hazmat suit whenever they think they’re getting close to the stuff? 3) Funny how so much of this movie takes place under the Atlantic Ocean, yet we never see a fish, or any aquatic plants. 4) Why do the Soviets leak everything to the press? If they want to steal the Byzanium on the high seas, wouldn’t it make more sense to keep everything quiet?

Rating: I wanted to like Raise the Titanic more than I did. Based on a Clive Cussler novel, the film is imaginative, ambitious, even spectacular in places, and it boasts an interesting cast, including a memorable cameo appearance by Alec Guiness as a survivor of the ill-fated ship. Unfortunately, Raise the Titanic was incompetently directed – it often gets bogged down in superfluous sub-plots and back-stories, and every scene seems to take a loooooooooong time. I cannot recommend this movie. 5/10 stars.

Would It Work For a Bad Movie Night?: Probably not – but take a drink every time Jason Robards seems grumpy.