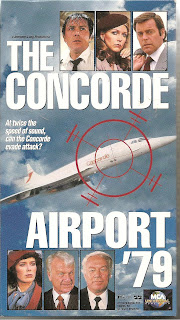 Hey Everyone, guess what – Schuster at the Movies is now two years old! I have posted links to my very first reviews, Citizen Kane and Lethal Weapon a number of times, but you might also enjoy Battlestar Galactica (the 1978 version), Raiders of the LostArk, Please Hammer Don’t Hurt ‘Em, and The X-Files.

Blurb From the VHS Jacket: “At twice the speed of sound, can the Concorde evade attack?”

What Did I Learn?: Apparently, stewardesses will allow you to keep your dog with you during a flight, play a saxophone in your seat, or smoke marijuana in the bathroom if you seem indignant enough.

Really?: Holy shit, where do I begin? 1) I’m pretty sure you can’t stick your hand out of an airplane that’s travelling at twice the speed of sound without it getting sliced off, lickity-split. 2) So wait... the owner of a major weapons firm would actually take the heat of destroying a commercial airliner because he wants to ice his girlfriend who knows too much? Couldn’t he simply kill her when she gets to Paris? 3) The Concorde is attacked twice over the Atlantic... and nobody looks into it? It flies the very next day for Moscow? 4) Again, why is Harrison so fixated on blowing up the Concorde when he could hire a hitman to kill Maggie in Paris? Come to think of it, why does he fly to Paris in the first place to meet with her, when he’s already decided she has to die? 5) I’m pretty sure that if I spent a night with a hot chick who “gets” me, and was later told she was a prostitute who was paid to show me a good time, I don’t think I would simply laugh off  the incident. 6) Speaking of which, I REALLY didn’t need to see George Kennedy get it on with a hooker in front of a roaring fire. 7) Hey wait... wasn’t Joe Patroni an airport mechanic with five kids in Airport? Since when did he become a full-fledged pilot with only one son?

Rating: The Concorde Airport ’79 is atrocious with a Capital A. The special effects are bargain-basement, the plot is filled with Buick-sized holes, and everything is tacky and ridiculous. Heck, this cinematic turd pretty much finished off Cicely Tyson's acting career! The one bright spot is George Kennedy, who provides a bit of humanity and good-natured humour because his George Patroni character is given a chance to shine; it’s a shame he wasn’t given top billing. I cannot recommend this movie. 2/10 stars.

Would it Work For a Bad Movie Night?: Take a drink every time the film cuts to a shot of the passengers in a state of panic.