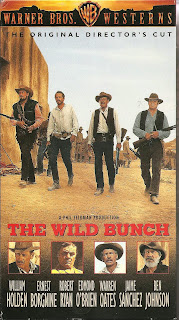 Synopsis: American gunslingers have a really bad day, get drunk, and wipe out the entire Mexican army.

Blurb From the VHS Jacket: “Few movies have been so initially controversial and enduringly brilliant as Sam Peckinpah’s film The Wild Bunch. By today’s standards, the violence that ignited firestorms of debate in 1969 seems less shocking. By any standard, the powerful tale of hang-dog desperados bound by a code of honor rates as one of the all-time greatest Westerns, perhaps one of the greatest of all films.”

What Did I Learn?: If your troops are unfamiliar with the workings of a heavy machine gun, you might want to read the instruction manual before you allow them to experiment with one.

Really?: 1) So wait... Angel only agrees to help the gang steal the guns if he can swipe a case for his buddies, who are fighting against their client? Does anyone think this is arrangement is going to end well? 2) Considering nobody in the gang actually trusts Mapache, I had a bit of trouble believing they would go back to town, where they could have been overpowered and forced to return Mapache’s gold. Why not take out Thornton’s sad-sack posse, instead? 3) I could see Pike and Dutch giving their lives to avenge Angel’s death, but Lyle and Tector? Don’t these guys hate his guts?

Rating: The Wild Bunch is the quintessential guy movie: loud, loaded with T&A, and quite violent – well, violent by 1969 benchmarks, anyway. It’s also a well-written, well-acted and incredibly compelling masterpiece that stands the test of time; we come to care about these men, even though it’s obvious they’re a bunch of cutthroats who will just as soon turn on each other as offer a helping hand. It’s too bad Peckinpah never made a prequel: I'd love to see Pike Bishop (William Holden) and Deke Thornton (Robert Ryan) rob a bank together. 9/10 stars.