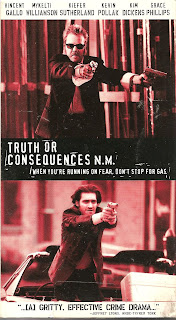 Hmm... this would have been perfect for my salute to Tarantino rip-off films.

Synopsis: Spree killer, dirtbag prison buddies, and semi-willing yuppie hostages embark on a voyage of personal discovery through the American Southwest after icing a drug dealer.


Blurb From the VHS Jacket: “The plan was simple enough. Crash a big drug deal. Hold up the boss. Make off with the cash. Simple enough... until an undercover cop takes a fatal bullet. Now. Four small-time crooks are on the run – with a suitcase full of cocaine, two yuppie hostages, and too many secrets to keep.”

What Did I Learn?: prosciutto is "good fucking ham."


You Might Like This Movie If: You figure it must be an extended version of this show.


Really?: 1) Hold on... there are a number of times when the gang could have cut the hostages loose without any fuss - especially when they change cars - and they don't. 2) So, Raymond is wrong about Eddie being alone in the building, and he has absolutely no idea that Eddie works for Tony Vago? I suppose criminals are often dumb, but why is this never explained? 3) Wait just a New York Minute... Raymond saw Curtis go apeshit and shoot Eddie and the undercover cop, and he KNOWS that Curtis hates Tony Vago for killing an old buddy. Why in the world would Raymond take Curtis along for backup when he meets with Vago? 4) Funny how the gang is captured on surveillance video, and yet they never seem to be recognized anywhere they go. Doesn't anyone watch America's Most Wanted?


Rating: Truth or Consequences New Mexico is certainly an entertaining movie, and Kiefer Sutherland turns in a fine performance as coke-snorting sociopath, Curtis (by contrast, Vincent Gallo always seems to play some variation of his character in Buffalo 66). Unfortunately, ToCNM drags by the end, the plot holes become a bit obvious, and somehow, Raymond and Addy - who start out as the film's protagonists - somehow get a little lost in the shuffle. 6/10 stars.