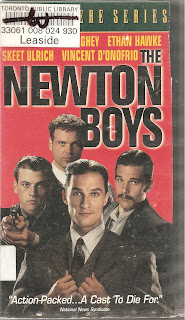 Blurb From the VHS Jacket: “They started out dirt poor – and ended up filthy rich! Matthew McConaughey, Ethan Hawke and Skeet Ulrich head an all-star cast in this action-packed adventure about the exploits of America’s most successful outlaws.”

What Did I Learn?:  Apparently, a judge will go easy on you if you plead guilty in court, and pepper your speech with folksy, aw-shucks witticisms.

You Might Like This Movie If: you'll watch anything that involves 1920s bank robbers.
Really?: The Newton Boys is based on a true story, so it might not be entirely fair to judge it along these lines (sometimes truth is stranger than fiction),  but gee... these guys never wore masks during their robberies, and yet nobody ever produced a good description of them? Is that credible? And when the banks started to adopt blast-proof round safes, why didn’t these guys find better targets (payroll runs?) or learn how to open them?

Rating: The Newton Boys is an enjoyable, if somewhat predictable, overly long, and by-the-numbers look at some likeable (and largely non-violent) bank robbing brothers. The movie is fun when the boys are robbing banks; it’s not much fun whenever Julianna Margulies nags McConaughey’s character about the need for him to go legit, and I wonder why writer Richard Linklater couldn’t have done a better job of defining the other brothers; frankly, I think Dock Newton could have been written out, entirely. 7/10 stars.