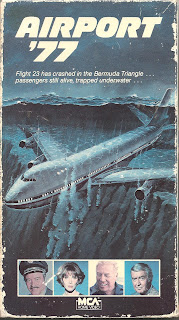 What Did I Learn?: An entire jetliner load of passengers and crew will awaken from knockout gas simultaneously, at just the right time.


Really?: 1) Wait... Christopher-Fucking-Lee is in this movie and he’s not only a good guy, but a hen-pecked milquetoast? 2) Um... I don’t want to sound like Tom Clancy or anyone, but I’m pretty sure Navy frogmen didn’t have long hair in the late 1970s. 3) So, what the hell is Joe Patroni (George Kennedy) doing in Florida? I thought he was based out of Chicago. His appearance in this movie seems a bit tacked-on. 4) After striking an oil rig, and then crashing into the ocean, I’m not entirely convinced a 747 would stay intact underwater, or that the Navy could raise it by inflating some big balloons underneath.

Rating: I expected to hate Airport ’77, and... I didn’t. Oh, it’s certainly a hunk of 1970s cheese, with terrible dialogue and a highly unbelievable plot, but the story is compelling and it’s fun to watch so many long-dead stars overact. Unfortunately, the movie’s tension is noticeably reduced when: a) the art thieves/hijackers no longer pose a threat to the other passengers after the plane crashes, and b) Captain Gallagher (Lemmon) reaches the surface after a daring escape. 6/10 stars.