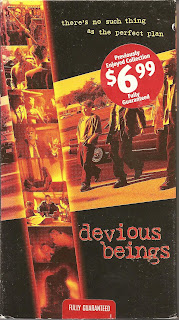 Synopsis: Loveable dirtbags with a suitcase of stolen ecstasy are pursued by world’s most Politically Correct drug dealer.

Blurb From the VHS Jacket: “Casey. Arrow. Jackson. They’ve been buddies since they were kids. They’re the rave crowd who can get any illicit drug for the right price. No way these guys could get played, right? Wrong. When their latest deal goes south, their entire world may go up in smoke. They’re up against the wall, and they’re running out of options. In the tradition of Go and Pulp Fiction, Devious Beings is a wild ride you’ll never forget.” [“In the tradition of Go and Pulp Fiction”? Oh, give me a break...]

What Did I Learn?: It’s ok to love sweet-and-sour pork ribs, but for fuck’s sake, chew them first, and have a glass of water nearby if you swallow a bone.

Really?: See “Synopsis”; I had a hard time believing a professional criminal would beat the shit out of a grocery store customer in broad daylight, in the middle of a parking lot because of a disagreement over paper or plastic bags.

Rating: Fans of the TV series Entourage might want to watch Devious Beings just to see Kevin Connolly in a previous acting role, but the film is otherwise pretty meh – there aren’t any great performances, and the story never really goes anywhere. It's a lot of pointless, graphic violence. I cannot recommend this movie. 4.5/10 stars.

Would it Work For a Bad Movie Night?: Take a drink every time one of the three main characters gets frustrated and says the word: “fuck”.